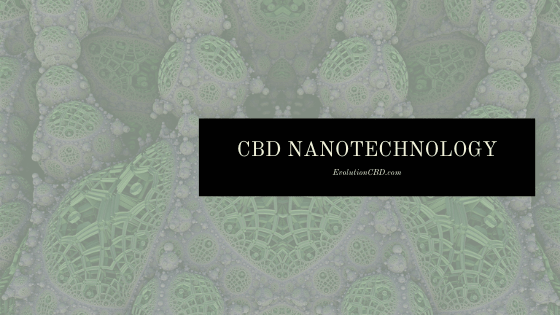 The Unique Capabilities of Nanotechnology for CBD oil

The industry for CBD has grown rapidly in the past decade. As Cannabis legalization progresses and conversations around hemp and Cannabis-related products become more mainstream, this growth is only set to increase. While valuations of the market size and forecasts for growth may vary, there is no doubt that the market is set for major expansion.

When markets experience this kind of rapid growth, we always benefit from streamlining, innovation and technological evolution. The CBD industry is no different.

One way in which we are already seeing rapid innovation in this industry is the use of Nanotechnology — technology that manipulates matter on a molecular and atomic scale. Nanotechnology in this area is increasingly proving to have the edge over regular oil. Why? It produces stronger, better quality oil that is more potent and acts more quickly.

To properly understand the unique capabilities of nanotechnology for CBD oil, we need to take a few steps back and consider what CBD is and what we want from it. Once we have done that, it is clear why CBD oil using nanotechnology outperforms its closest substitutes.

Here's everything you need to know about this new breakthrough:

Cannabidiol — or CBD as we call it — is a non-intoxicating compound found in the flower of cannabis. It also occurs in hemp, which is a plant in the Cannabis Sativa plant species, and it is also non-intoxicating.

While the THC (tetrahydrocannabinol) in cannabis gets you high, CBD extract has non-THC medicinal and therapeutic compounds. Indeed, cannabidiol has a long history going back thousands of years for its use in medicine and to treat health problems. Queen Victoria treated her menstrual cramps with cannabis rich in CBD.

Safe and non-addictive, it is one of more than a hundred cannabinoids derived from the cannabis plant.

How Does CBD work?

Research is still growing about the way CBD works at a molecular level. However, we do know the following:

CBD interacts with the body’s endocannabinoid system, which was discovered during early research on marijuana’s effects. This system is responsible for regulating a broad range of physiological processes that occur in the body.

CBD’s role in the interaction is to copy and augment endogenous cannabinoids, which are the compounds found in the endocannabinoid system.

In this process, cannabis terpenes, or the aromatic oils in cannabis that give it its distinctive flavor, work together in what scientists call the “entourage effect.” They multiply the plant’s therapeutic effects so that it is greater than the total of the plant’s individual components.

CBD oil is one of the most popular manifestations of CBD. More people than ever before view it favorably for its therapeutic benefits. The oil is extracted from oily ‘trichomes’ that protect the plant from heat and ultraviolet radiation. This oily resin has antibacterial and anti-fungal properties to protect the plant, and this same resin has been shown to contain compounds that can benefit human health.

When we talk about CBD oil, we are referring to extracts used in products such as tinctures and capsules.

Nanotechnology manipulates and uses matter at the atomic level, controlling individual atoms and molecules. This field spans across science, biology, technology and many others.

The benefits derived from nanotechnology depend on why its being used and what benefits are desirable. This means you can make materials lighter, stronger, more durable, smaller or more reactive, for instance.

In medicine, nanotechnology enables doctors to directly target diseased cells. Take sunscreen, for example. Nanoparticles are very effective at absorbing cancer-causing ultraviolet light. And because they absorb and scatter visible light, nano sunscreen appears transparent and lighter on the skin, which encourages people to use more sunscreen and thus better protects them against ultraviolet light.

As author and CBD expert Gretchen Lidicker wrote, nanotechnology is “all about speed, efficacy and cost-effectiveness." Working on the molecular level, nanotechnology has obvious benefits for CBD oil. It optimizes the potency, strength and speed of cannabinoids by putting them in their most bio-active state.

What does Nanotechnology do for CBD?

The particular benefit of using nanotechnology is, in theory, to solve an age old problem: mixing oil and water. Salad dressings and mayonnaise solve this problem by using emulsifiers, which act as a border between oil and water to allow them to blend together.

The problem arises for oil users when they ingest it. Your digestive tract is mostly water and moisture, which doesn’t absorb the oil. The oil remains in droplet form until it has been fully digested; throughout the whole time the oil is being ingested, most of its molecules are inaccessible. During the digestion, a large portion of the CBD you swallow breaks up. Our ‘first-pass metabolism’ largely breaks up drugs that are administered orally before they can enter our system, so most of the CBD you ingest is wasted or not processed until it reaches the intestines.

Swishing the oil around your mouth before swallowing can solve this problem and boost absorption, nanotechnology is making this unnecessary.

The reasoning that attracts manufacturers and consumers to nanotechnology is that it breaks CBD oil molecules up into smaller particles, which can then cover a greater area size.

It works a little like this: Imagine you have a balloon full of sweets, and then you burst the balloon open; once it has burst, the sweets explode and spread throughout a bigger area than when they were in the balloon.

Nanotechnology breaks up balls of Cannabinoids so that they are thousands of times smaller — cutting a particle in half increases the size of the area it can work on. Now broken up, the total molecules cover a greater area. Because each particle is smaller, the particles can therefore be absorbed more quickly.

And what does this mean for the oil and water problem? Nano CBD is broken down so that its particles can interact better with water. Therefore, your body absorbs it quickly and efficiently. With nano CBD, absorption can occur before digestion. The maximum amount that a cell can absorb increases to 8 mg to 2 mg.

The effect? CBD oil is more potent and fast-acting thanks to nanotechnology.

Does it Change the Feeling of CBD?

The other way nanotechnology helps is by enhancing CBD. For this type, nanoparticle technology works by coating CBD compounds called liposomes in microscopic fat, making the effects strong and more instantaneous.

Either way, the key to nanotechnology working for CBD is to improve its ‘bioavailability’ and to help particles to move more easily and quickly through the body.

Bioavailability describes how effectively a substance can be absorbed into the body and the degree to which it produces an active effect once it has entered the bloodstream. Our bodies aren’t actually that efficient at using all that we consume and for CBD, the bioavailability is usually very low at around 6% when taken orally.

When CBD has good bioavailability, it is absorbed more easily and can, therefore, interact with the endocannabinoid system with greater ease.

Therefore, nano CBD increases the effects in your body over regular usage.

How Do Scientists Feel About Nano CBD Oil?

On the whole, nano CBD is viewed favorably. The overall consensus is that nanotechnology improves the effectiveness of CBD, but not necessarily for the reasons that most retailers and advocates claim — that the smaller particles make it easier for absorption in the blood.

Although research is still evolving on how the science and tech work, it seems to be the change in behavior that makes nano CBD effective, not simply the size making absorption easier. The mistake many people make is to see the improved effectiveness of CBD as meaning that it is now ‘water-soluble’, but the molecules just appear to be soluble.

How Effective is Nanotechnology in CBD oil? Does it Work?

On the whole, cannabinoids are lipophilic and hydrophobic and so repel water-based molecules, and hence why the cannabinoid in question generally has a low rate of bioavailability. Our bodies use a hydrophilic system, so it is difficult for CBD to be absorbed into the bloodstream. A lot of CBD is wasted because it cannot bind with water-based molecules.

This study also proved the effectiveness of nano-enhanced CBD. Once broken down into nanoparticles, researchers made the CBD molecules entirely lipophilic by surrounding them in Nanostructured Lipid Carriers (NLCs). This coating makes it much easier for your endocannabinoid system to accept CBD molecules.

Covering the molecules in NLCs removed absorption issues to make CBD particles more bioactive and increasingly bioavailable, and also decreased the premature break down of the molecules.

While it is still early days for nano CBD, nanotechnology is showing it can make regular oil more effective. Positive feelings about nanotechnology will only increase as new research sheds light on CBD at the molecular level.

Why Nano CBD Oil is Better Than the Rest

What makes CBD nanotechnology unique is that it attempts to overcome much of what makes regular oil less effective. Compared with competitors, ‘nanoed’ oil is more effective, more potent and faster-acting possibly because of its potential for increased bioavailability.

After the molecules have been reduced to the size of a nanoparticle, your body’s cells are able to absorb up to 8 mg, compared with a maximum of 2 mg from regular CBD.

Regular oil doesn’t get processed properly until it reaches the intestines and the digestion process is over. In addition to wasting a lot of particles in this time, this means that CBD oil administered orally can take a while to become active.

Instead of taking 1 to 2 hours, nano CBD can start acting within 30 minutes or even immediately. This happens because nanotechnology CBD particles attach to the water-based molecules in your digestive tract — regular CBD would reject those molecules — and particles covered in NLCs are able to interact with the endocannabinoid system more easily.

Regular oil is pretty inefficient: only around 6% enters the bloodstream and becomes active. The possible effect of nanotechnology is to increase the bioavailability to upwards of 80%, although research is still ongoing into just how effective it is.

What we do know is that by making it easier for CBD molecules to interact with water-based molecules, it can enter your bloodstream during and even before digestion — instead of being wasted as it would be with regular oil. On top of that, NLCs improve the particles' interaction with the cannabinoid system and make it easier for the system to accept them.

The increased recognition of CBD oil's therapeutic benefits by society at large means it is going to have a larger role in our lives as a treatment for a range of maladies. Nanotechnology will only make our connection to CBD even stronger as more research develops.

As we have laid out here, regular oil is proving to be a useful aid for people but it is also pretty inefficient at what it does. Fortunately, scientists are embracing nanotechnology for its unique ability to make CBD oil better at what it does. As a result, it will be available to more people in the upcoming decade.

What do you think about nano CBD oil? Do you think it sounds like an improvement? If so, try it for yourself and feel the effects!